A downloadable game for Windows and macOS


1. Shooting. Are you a good shooter or not?

2. Saloon. Are you conflict or shy?

3. Train. Will you survive?

8 different ways to complete the game, easter eggs and a bit of humour.

Anything else that is not understandable - nothing! :)

Art made with MagicaVoxel, some sounds by freesound.org, some music by freemusicarchive.org (Teddy and Marge - Dark Eyes, The Red Thread - After The Last).

Made for Mystic Western Game Jam 2016.

Pretty fun game, though I don't know what to do at the end

Hey! Thank you for the playing. Yeap, it's not so easy. Too much time was spent on the graphic and a little bit to the narrative part. The guy in blue jeans and a white t-shirt is the main character.

Scene 2. Conflict about the lady. Just click on the [opponent / your gang] to make a conflict or leave the salon.

Scene 3. The train. There is the timer to make an action and just two options: will the main character die or not.

Scene 4.1. The cave entrance. Talk with cactus or just enter to the cave.

Scene 4.2. The empty bar. Play at the piano and go to the basement.

Scene 5. The cave. Listen the tones and play music fragments in the right order. One part is the start/end of another part. 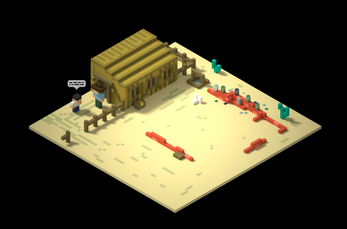 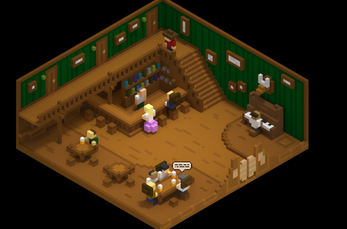